I’ve seen several tutorials on how to record phone calls with Audacity, but they all seem to be for using Audacity on Windows or Mac. So, here’s how you do it on Ubuntu. I’m using Ubuntu 16.04. It’s not all that hard once you see how it works. The complicating factor is that you want to record BOTH your mic AND your system audio at the same time. I’m going to show you how to use Google Hangouts to make a phone call and record the audio. Here’s how it works.

At the bottom of this page there is a video tutorial demonstrating how all this works together. Before getting to that, here are the details on the things you need to install and how it work.

A Couple Things To Install

The first thing you need is Audacity wich is probably in your distribution’s repository. Open up the Ubuntu Software app and install it or open your terminal and type:

Next, you will need to install Pulse Audio Volume Control which is called pavucontrol and is probably in your distribution’s repository. In Ubuntu, it’s as easy as opening up the Ubuntu Software app and searching for pvaucontrol

Alternatively, you can open your terminal and type:

There are a couple things you need to set up to pull all this together.

Combining System Sound and Your Mic

This is really the trick to getting everything to work. You need to create a loop back for the mic so it gets picked up as system sound. To do that issue this command in your terminal.

This command sets up a loop back so you can send the input from your microphone through your system audio. There will probably be a little bit of latency (echo) but it’s not hard to get used to. The reason you need to do this is so the audio from your mic will be in the system audio which is the audio source you will be recording.

After you’re finished recording, you can stop the loop back with this command:

All you are doing here is interacting with Pulse Audio Volume Control from the command line to load and unload the loopback module. You do not need to sudo this command.

In Audacity, the host should be ALSA and the output device should be pulse (or default, because pulse is probably your default audio system already).

Click the “Click to Start Monitoring” button so Audacity will start monitoring the audio. This is important because this is makes Pulse Audio Volume Control starts paying attention to Audacity.

Go ahead and call somebody (or yourself on a different number) from Google Hangouts. I have a Google  Voice number that I use to make outgoing calls from Hangouts and, for testing this stuff out, I just called my mobile phone.

Open Pulse Audio Volume Control and navigate to the Recording tab. This is what the audio settings should look like. 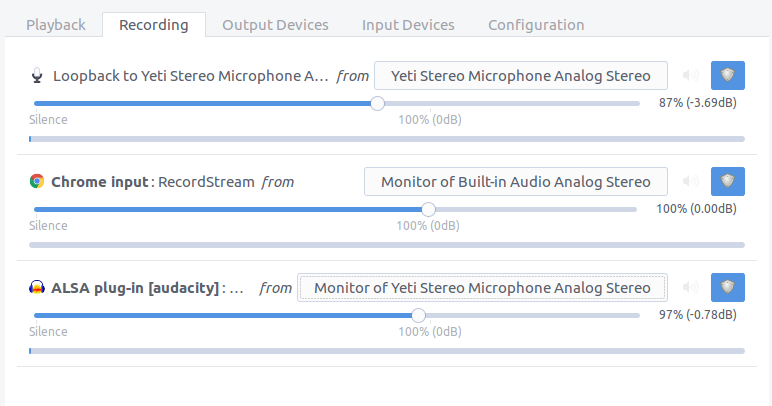 In the above example, I am using my Blue Yeti microphone and have my headphones plugged into the headphone jack on the Blue Yeti. But the way it all shakes out is this:

Chrome input
The source (from value) for this should be your built-in audio, which basically represents your speakers. It’s the audio from the person you are talking to. The slider is the level of the audio coming in from the Google Hangout (which I’m running in the Chrome web browser). Again, you can adjust the level of that input here as well.

ALSA plug-in [audacity]
The source (from value) here is what you want Audacity to be recording. In this case, I want to record the stuff I’m hearing in my headphones which are plugged into they Blue Yeti microphone. The slider here is sort of like the master volume for the recording. You’ll probably want to keep this somewhere near 100%.

If you don’t have an external microphone plugged in, you can use your built-in mic – like on a laptop or something. If you do that, Pulse Audio Volume Control will look like this.

The big difference here is that the recording is coming from the Monitor of Built-in Audio which is what you hear when you plug your headphones directly into your laptop or computer (using the built-in sound card).

One last thing to check on is your playback settings in the Playback tab of the Pulse Audio Volume Control. 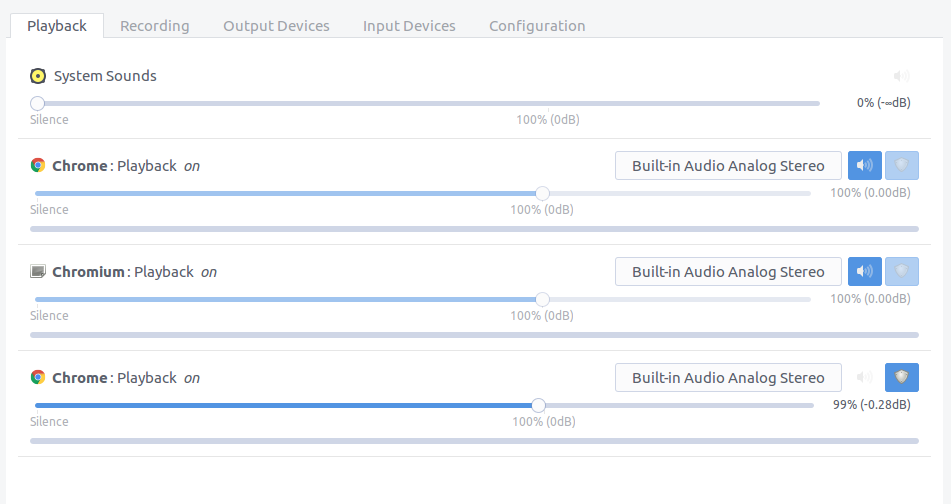 An optional thing you can do is mute the channels you’re not using. The only playback channel I have open is the Chrome channel I’m using for the Google Hangout. I have all of that audio running through the Built-in Audio about 100%.

While Audacity won’t capture any video, it’s really nice to be able to enhance the audio of the call in Audacity. Having recorded a couple calls, I’ve noticed that my side of the convesation is often a little louder than the person I’m speaking to. I’ve got a fairly nice mic, and the other person often is on their phone or using the built-in, internal mic on their laptop. So it’s nice to be able to level out the volumes. Also, if there’s background hum or hiss, like from an air conditioner or something, Audacity is really good and cleaning that up.

So, if I’m going to share the audio somewhere, like on a podcast or something, I do a couple quick tweaks.

Amplify: If the other person’s audio is a bit low, I run the entire call through Audacity’s Amplify effect. That brings up the volumes nicely.

Compressor: Running things through the compressor levels all the audio out nicely.

Noise Reduction: This is one of those eyebrow-raising, effects in Audacity. Every time I use it, I’m surprised by how good it is as cleaning up background hums and hisses.

After those three tweaks, you’ve got some really nice sounding audio from a Google Hangouts call.