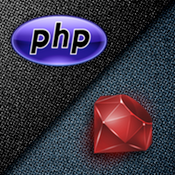 Back in 2007 I wrote an article titled PHP vs Ruby – Practical Language Differences which drew a fair amount of attention. Now that I’ve been working with Ruby in much more depth and both PHP and Ruby have matured dramatically over the past five years it is time to reevaluate the comparison.

The previous article was primarily centered around the languages themselves and was not a showdown between any particular frameworks. In this review we will touch a bit more on frameworks, but in the context of a high level review of the two different landscapes of PHP vs Ruby for web development. We will not be getting down to feature-by-feature detail.

The History And Purpose Of PHP and Ruby

It is interesting to note that both PHP and Ruby both came onto the scene around 1995. So the claims the Ruby is a “more modern” language is not really true chronologically. The major differences between PHP and Ruby have to do with their purposes when they were created. PHP was designed to be an embedded scripting language to provide some dynamic functionality to otherwise static web pages. Ruby, on the other hand, was designed to be a scripting language like Perl, but more readable and expressive. It was not until 2005 when Ruby really found its way onto the web thanks to the popular Ruby on Rails framework.

Knowing this little bit of history about the languages really sheds light on their differences. PHP was not originally intended to be a full-blow, object oriented coding language. Instead, the code was embedded in HTML files and engineered to solve web specific tasks. Therefore, PHP did was not originally designed to have things like classes, namespaces and exception handling. All of those things were added on as the language developed. Ruby, on the other hand, was designed from day one to be a fully object oriented language and to make programmers happy. This also explains why PHP has a somewhat inconsistent set of parameter sequences and function names like the notorious needle in a haystack issue while ruby is very concise and consistent.

Web frameworks have come a very long way in the five years since I last reviewed PHP and Ruby. PHP and Ruby are both programming languages. Ruby has a clear winner in terms of popularity when it comes to a framework, so much so that many people do not even know about Ruby apart from Ruby on Rails. PHP, on the other hand, has more frameworks than you can shake a stick at.

Ruby does have another light weight framework called Sinatra. Sinatra is what folks in the PHP wold refer to as a “micro-framework” while Rails is a complete MVC framework. Ruby on Rails and Sinatra are clearly the two main Ruby based frameworks. If you are building a relatively small application like a personal blog or something you may go with Sinatra. If you are building a large application you would go with Ruby on Rails.

We currently do not have any Sinatra based applications in production but we do have two Ruby on Rails applications out there. Mijireh is our e-commerce service for accepting secure credit card payments on a hosted checkout page that looks just like your own site. You get all the PCI compliance, and security benefits of using an off-site checkout service like PayPal or Google Checkout and you do not have to give up the design of your checkout pages. Mijireh is a Ruby on Rails application and there are a few WordPress E-commerce Plugins that integrate with it.

I am very happy to see that the PHP community is beginning to shift towards building reusable libraries that are not framework dependent. What ruby gems are to Ruby, Composer and Packagist are to PHP. Here is great article titled Packages: The Way Forward For PHP. The idea is that Composer is a package manager that tracks local dependencies in your PHP projects. Packagist is the main Composer repository bringing together a huge supply of PHP packages that you can install with Composer.

One of the reasons F3 continues to be my favorite PHP framework is because it is very easy to make use of Composer when using F3. There are other PHP frameworks embracing Composer as well. Here are a few of the PHP frameworks that all seem to be really nice and why I like them.

Slim Framework 2 requires PHP 5.3 or newer and can be installed with Composer. Slim is a micro-framework in the same genre as the Fat Free Framework (or Sinatra for Ruby).

Fuel PHP will be supporting Composer packages out of the box. FuelPHP is a bit heavier of a framework than Slim or the Fat Free Framework. FuelPHP has code generators, database migrations, and a console interface all built into the framework. All very nice features, but this move Fuel more into the realm of Ruby on Rails style frameworks. It’s going to take some time to learn your way around, but it can do some nice things.

Laravel is the new framework getting all the attention right now. I particularly like how Unit Testing is baked right into the framework. This encourages PHP developers to actually write tests – something that should be obvious and mandatory yet so often seems to be neglected in the PHP community. As of Laravel 4, (not yet officially released at the time of this writing) it is my understanding that all of its components will be managed through Composer. Laravel is the only PHP framework that I know of (feel free to let me know if this is not the case) where you will be able to lock down certain components by version number while still updating other components in your application via Composer. With Laravel and Composer you will be able to pull in updates without having to manually update/replace the system (Laravel) folder.

So which platform do you choose when planning to build your next web application? The bottom line is you can do almost all of the same stuff no matter what platform you pick. It comes down to how easy it is to pull off. For example, Ruby on Rails as a framework, is not all that different from using Laravel, for example. But Ruby on Rails has the benefit of ruby gems which is much more mature and has much stronger community support than Composer has right now. Therefore, the likelihood of you finding the gem you need is higher than finding the package you need in Composer. Also, the tools of Ruby based applications are a little more seasoned than they are with PHP.

Ruby seems to be leading the way with gems for things like Pusher, Resque, SideKick, bugsnag, etc. I am not saying that those things are totally unavailable for PHP. You can do them in PHP too. There are PHP libraries such as bugsnag-php, php-resqueue and there is even an example for using Pusher in PHP. I am just suggesting that the Ruby is a little bit ahead of PHP for these sorts of things. Ruby is leading the way and PHP is playing catch up to some degree. Be that as it may, I still have not found anything that we can do in Ruby that we cannot do at all in PHP.

The last piece of the puzzle is web hosting. There is a big difference between simply hosting a website and hosting a web application. If you are looking to host a personal site, like a blog, it is no secret that WordPress, which is built in PHP, is the clear winner. There are far more WordPress sites than all the other Ruby based CMS sites put together. With PHP you just plop your files on the server and you are finished. Theoretically, you can do enjoy the same “upload and go” style hosting of a Ruby web application too using Phusion Passenger. There are very few shared hosts that have ruby support compared to hosts that support PHP. One such host, however is A Small Orange and they do offer Ruby support via Phusion Passenger as well as PHP, Python and Perl. PHP is the clear winner when it comes to hosting a small web application or CMS like WordPress. Or, if you happen to buy an off-the-shelf self-hosted web application like iDevAffiliate affiliate program or the LemonStand eCommerce package it will most likely be a PHP application because of how easy and available PHP web hosting is.

If you are going to be developing a large scale web application or even a medium scale project you will most likely want a more robust hosting solution and will either get your own dedicated server, a VPS, or a slice of a cloud somewhere. As soon as you venture into anything more powerful than shared hosting you will be setting up your own server configuration and will probably have access to install anything you want. For example, if you intended to run Resque for your background jobs you will also need to install Redis. By the time you get to this level of configuring your own server, the general availability of PHP is not really an issue anymore. Just install whatever you want.

Rather than building/setting up your own server you might think about using a cloud hosting platform. Once again this is an area where Ruby has lead the way with Heroku, but PHP has followed suite with PHPFog. Both are excellent, easy to use, very powerful platforms that take much of the hassle of deploying a full-blown web application. To prove my point of the Ruby solutions being more seasoned and established just take a look at the list of add-ons available for Heroku vs the add-ons for PHPFog. If you are interested, here is a more in depth review of Heroku vs AppFog (the company behind PHPFog).

Concerning the two languages themselves, Ruby is more concise, consistent, and more cleanly object oriented than PHP. In real-world practical use, however, there is not anything you can do in Ruby that you cannot do in PHP. I am not talking about stuff like re-opening classes in Ruby. While you cannot technically re-open a class and modify it on the fly in PHP, you can still accomplish the same end goals, you may just have to approach the problem in a different way. The primary difference between Ruby and PHP is syntactical sugar which many people find very important for programmer efficiency and happiness but in everyday programming scenarios both languages can generally do all the same things.

Here is my score card to to summarize my 2012 year and review of PHP vs Ruby:

The above little score card is just a reflection of my thoughts and experience with PHP and Ruby. I am personally heavily involved in both PHP and Ruby on Rails development. I am one of the lead developers for the Cart66 WordPress E-commerce plugin which, of course, is PHP and I am also involved with CloudSwipe which includes both a WordPress plugin and a Ruby on Rails powered E-commerce platform. The bottom line, as always, is pick the solution that is right for you and your development team. My hope is that this article was helpful in shedding some light on the strengths of both PHP and Ruby, spreading the word about what is available to both languages, and helping you decide what is right for your next project.

Please leave some tasteful comments with your experience developing web applications with either PHP or Ruby and where you think things are headed in the future.